Get me outta here!

Rule number one when looking for a cookbook?  Must have pictures.  Seems kind of childish right?  No interest unless there is a picture on every page for me!  I love seeing a picture of what the food looks like, the name isn’t enough to bring me in.  And, when flipping through my cookbooks to decide what I want to eat during the week, I don’t want to have to look at all of the ingredients to decide what it is that I want to cook for the week!  That’s why pictures are so important!  Cookbooks that have absolutely no pictures are completely boring.  The majority of Rachael Ray’s cookbooks have absolutely no pictures and that drives me crazy because I love her recipes, but can’t bring myself to buy her cookbooks because there are no pictures, except…

This week I tried Rachael Ray’s “Real-deal Rellenos” from her cookbook Look + Cook.  There was so many different flavors in this recipe that I didn’t know what to do with myself!  I hope everyone else enjoys it just as much as I did. 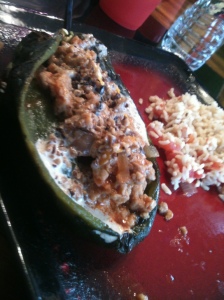 1.  Broil the poblano whole under the broiler for about 10 minutes on each side.  When they are done put them in a bowl and cover with plastic wrap and allow them to cool.  When cooled, peel the skin off very carefully and do not tear into the pepper.  Then, slice it like a book and scoop out the seeds. 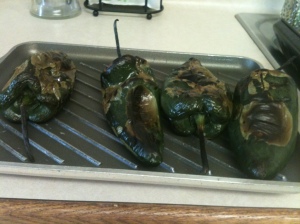 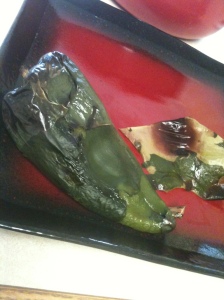 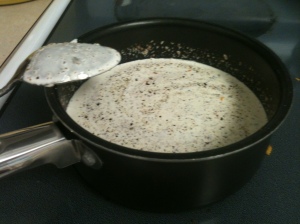 3.  Place a large skillet with the EVOO and the ground pork/beef over medium heat.  Cook until browned.  Add in the garlic and onion.  Stir in the cumin, paprika, cinnamon, raisins, tomato paste, beef stock, salt and pepper.  Cook until the liquid has reduced.

4.  Fill the poblanos with the meat filling and top with the thickened cream.  Serve with rice. 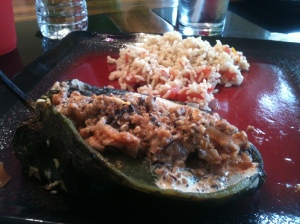 What have I been cooking?